Taking Time For Me Made Me a Better…Everything

Foreword: I wrote this more than a year ago, long before becoming a Professional Organizer 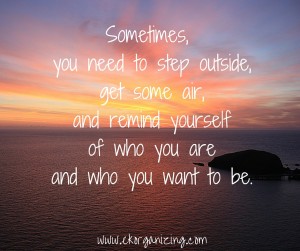 was anywhere on my radar. I’m publishing it now because everything I wrote still holds true. I think the reason I feel so settled now is because of the time I took after leaving a long-term job; time I used to get to know “me” again.

I know that choosing to stay unemployed for a while was a luxury that not everyone gets and I know how blessed I was. But I also know that everything I am doing today – for my career, for my family, for me – is better and more fulfilling because I was granted that time.

Thank you for indulging me in my time travel.

Since leaving my job after 13 years, I’ve been told that it will feel like a death; that it’s a process; that the emotions will come in waves.

And, while it’s true that I miss parts of my job and sometimes worry about the next step, I am mostly LOVING BEING UNEMPLOYED.

I know it may sound self-indulgent. I can even hear some of you yelling: “Get off the couch!” “Get a job!”

And for the most part I agree with you.

It’s not like my kids are at home for much of the day. In fact, I worked during much of their baby and toddler years. Oh, the irony.

But instead of focusing on the loss, the anxiety, the “what am I going to do now?” nightmares – I’ve decided to enjoy every second.

When people ask me what I’m doing now, I tell them I’m taking some time for myself.

When I drop the kids off in the morning, I come home to a hot cup of coffee and a leisurely breakfast.

I walk everywhere. The errands take twice the time but I get some much needed exercise and I get to enjoy the feeling of having nowhere else to be.

And yes, when my eyes start to close and I can’t control the yawns, you may find me napping on the couch in the middle of the day.

I know it can’t last. My salary was not just for the extras like dinners out and the occasional trip. My salary actually contributed to the daily running of our household and we probably need to replace it sooner than later.

My husband is getting fresh dinners nightly, and a more patient listener, and a wife who is willing to stay up much later because it’s not a school night for her anymore.

So while I know that my resume has to be updated, and I have to start actively pursuing the offers I’ve received, and I have to actually get off the couch, I am choosing to embrace this unplanned vacation and allow myself this freedom.

Because soon enough, I’ll be yelling again, and skipping breakfast again, and going to bed before my kids again.

Stay tuned for How To Find A New Career in 5 Easy Steps.